The Circle Line
If there is one thing about the Prisoner series it is this, that the Prisoner is a vicious circle from which there is no escape. That the Prisoner travels in circles which is demonstrated in the episode ‘Many Happy Returns,’ as he finishes up at the very spot he started out from. That the wheels of the Penny Farthing turn in varying degrees of circles. At the end of Fall Out the Prisoner has finally come "full circle," but has learned little or nothing by the experience.
And of course there is "squaring the circle," or is it "circling the square?" Anyway whichever is shaped to fit, which takes place in the Managers office at the Labour Exchange, when the Prisoner is given a round peg to fit in a square hole. The square hole turns into a circle, meaning the village is prepared to change so as to make the Prisoner fit!

How often do you watch the Prisoner series, and on what format, video of ? Because since the advent of the have you ditched those Precision, Channel 5, MPI Home Video, and all the subsequent Prisoner releases in video box-sets?
For me, well I watch the Prisoner series once a year, it used to be twice a year once upon a time, and then the occasional episode. And on what format? Well it's generally on video, because despite the Prisoner's release on and re-mastering of the 35mm prints, my favourite format is still video, and more to the point those Channel 5 video's which I began to collect back in November 1986, over twenty years ago. And what's more those Channel 5 videos still play as good today as they did the first time.
A cruel Act!
It was a cruel act wasn't it, perhaps the most cruel act of all that comes at the end of ‘The Schizoid Man.’ When No.2 asks No.6 not to forget to give his regards to Susan, and allows No.6 to get aboard the helicopter. To let the helicopter take off and make No.6 think he's got away with it, only for the helicopter to circle the village, then to land from where it took of from. That was cruel of No.2, and perhaps because of that he's the worst of them all! 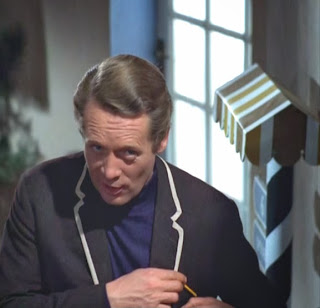 The rest of the scene being that of the Triquetrum, where No.6 is using an ancient Greek device in an attempt to find out the location of the village by the measurement of the stars. This scene is of course screened in full during what fans the Prisoner have  become pleased to call ‘The Alternative Chimes of Big Ben.’
"Long Lunch" No.6 says as he goes on to invite Nadia in for a night cap - drink. The trouble is as No.6 does so, he's putting a pencil in the breast pocket of his blazer after just having made a note of an astrological measurement on a sheet of paper. So the placing of the pencil is left over from a deleted scene during ‘The Chimes of Big Ben,’ which as I write, doesn't make any sense, not without the rest of the scene.
An after thought….I suppose he might have been completing the chess problem in The Tally Ho!