This image, taken from the Department of Visual Records, is of course the steel electronic eye which orbits the Control Room. Through which someone, possibly Number One, can himself keep an open surveillance eye on what's going on. A case of the Observers themselves becoming the observed. 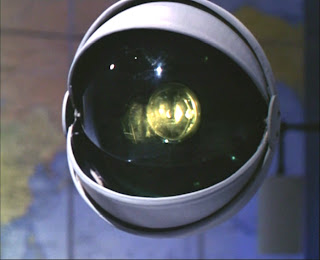 The same type can also be seen secured into the hull of the Fall Out rocket, through which No.1 does keep an eye on the court proceedings. And if you ever wondered what happened to these steel surveillance cameras, or indeed the technology behind them, then I have one answer for you.
I had quite forgot about the following picture, I came across it when I was going through an old file of letters. It was sent to me by an old friend, Bill, after a trip to Paris several years ago. 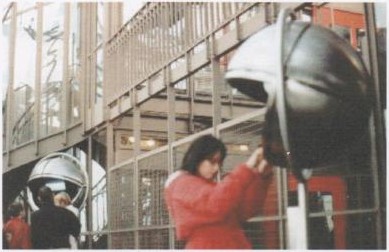 He went to to see the Eiffel Tower, and encountered these devices half-way up. When I saw the picture I was amazed, and what a coincidence I thought. In truth, these are not surveillance cameras on the Eiffel Tower, but TV covers for tourist information. I'm still impressed with their design, and who is to say the designer was not influenced by the Prisoner. What is it No.113 wrote on his note pad? "Our exports will operate in every corner of the globe," yes, that was it.

I'll be seeing you
Posted by David Stimpson at 08:23