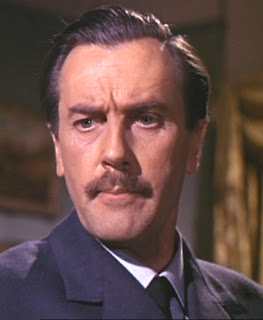 It was he who was supposed to have been the pilot of the Gloster Meteor jet aircraft, with No.6 as the navigator, as they swept a certain area of some 1,750 square miles south of , and .
However as we are all witness to, he never makes it. Either he's "in on it" and simply hands over to the Milkman who then pilots the aircraft. Or he is attacked by the Milkman, rendered unconscious, and then the Milkman takes the Group Captains place in the cockpit of the Gloster Meteor.
Either way, the Group Captain would have some explaining to do, to answer some embarrassing questions in fact. But of course even if the Group Captain was "in on it," he could feign having been attacked, even showing signs of having been so, "roughed up" a little by the Milkman.
So where does this leave the situation? Well this is evidence that their ex-colleague was quite possibly telling the truth, certainly after his second disappearence. And this would be reconfirmed by the disappearance of the Gloster Meteor jet, somewhere south of , , and .
The disappearance of the aircraft? Well the Milkman could hardly return it to the aerodrome, could he? Perhaps there was an accident at sea, and No.6 is thought to have died in that accident! Either way, their ex-colleague has gone again, and we are witness to the fact that the Colonel does nothing to try and find him. Because after all they do still have the search co-ordinates which their ex-colleague would have followed to find the villages location. So why didn't the Colonel see to it that a search was then carried out. Or did he, and nothing was found of him or the village. If he did it's a pity, after all Thorpe found his way to the village.

Just a minute! If the Group Captain was completely innocent in all this, at some point he would have raised the alarm, or be found by someone else. Then why was RAF Gibraltar not notified of the bogus pilot of the Meteor jet, and ordered to retain him? If on the other hand the Group Captain was working for the Village, he would make himself scarce and say nothing.

Be seeing you
Posted by David Stimpson at 08:06