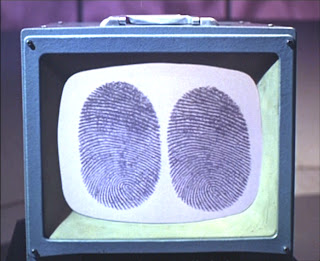 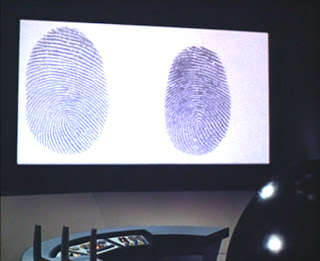 "The trouble with science is" said No.6 "that it can be perverted!" and No.6 tended to agree with him. See here, the two thumb prints on the wall screen in the left hand picture. The one on the left is No.6's thumb print, and the on one the left is No.6's thumb print, they are not identical. Yet on the monitor both No.6's thumb prints are identical!
Manipulation indeed. No.6 {Curtis} could have had the same thumb print as No.6 through having a latex thumb print of No.6's, in the same was as James Bond did of smuggler Peter Franks in the film Diamonds Are Forever.
But it would seem either way that even thumb prints are no proof of one's identity in the Village. And so No.6 fell into the trap of involving No.24-Allison, seeing as how he ejoys a mental link with her. But then even that was perverted, as the deck of Zener card was stacked in No.6, Curtis' favour.