"He's an old, old friend who never gives up" responds the Colonel.

Which in turn makes No.6 his own worst enemy!

No.6 is not a man to simply sit about to wait and see what happens. He is a man of Action, that's Action with a capital "A". Neither is he a man who can simply accept his freedom having once escaped the clutches of the........... of the village. He needs to know which side runs the village, he has suspicions that it is that of his own people. And more, he has to go and find the village again, and yet more, he actually goes back to the village, and it is this which makes No.6 his own worst enemy!
However, having returned to the village, is a promise half kept to No.2. That No.6 would escape and come back, come back, wipe the village off the face of the Earth. Obliterate it and No.2 with it. The first part of this promise the Prisoner kept, and went for the second in Fall Out when he launched the rocket, causing the mass evacuation.

It Makes You Think – Well It does Me 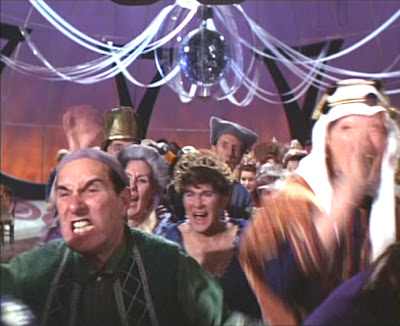 Imagine if you will what might have happened if the people had actually caught up with the Prisoner as they chased him through the corridors of the Town Hall in Dance of the Dead, all screaming and baying for his blood. The prisoner who had been found guilty at his trial, and sentenced to death, the people carrying out the sentence in the name of justice! If they had caught up with the Prisoner, well they would have torn him limb from limb, or at the very least beat the Prisoner to death. Where would the so called Justice have been in that? And of course, where would that have left No.2?

BcNu
Posted by David Stimpson at 08:00