In A B and C No.2 said that the Prisoner-No.6's whole life ahd been researched and computed, so that it all apparently boiled down to A B and C, and I give credit to ZM72, is this the computer which carried out the computation of No.6's whole life? 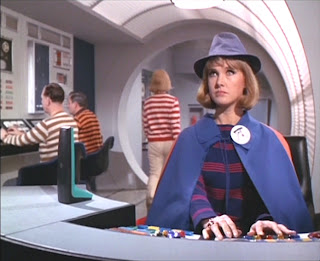 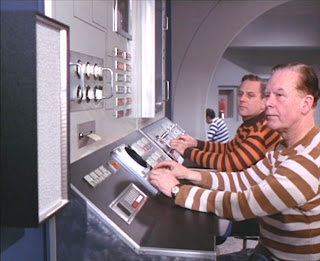 Yes I know the pictures come from It's Your Funeral in which a daily prognosis was carried out on No.6 for No.2, but the Cypher Room would be the same in A B and C as it is in It's Your Funeral and Hammer Into Anvil, only some of the personnel might be different.
So, it was once suggested that in The General No.6 had the opportunity to ask the General who No.1 is. Well I don't think the General would have sufficiant basic facts to answer that one. Yes, the General can answer any question from advance mathermatics to molecular structure, from philosophy to crop-spraying, given the basic facts. But seeing as how No.6 didn't have the slightest basic fact about No.1........... But did No.2 miss an opportunity with the General? The Village Administration had everything on the Prisoner-No.6, we've been told that in previous episodes. So No.2 could easily have had all that information on No.6 programmed into the General, and then ask the question "Why did No.6 resign?"
Yet there was an earlier opportunity for No.2 to try and gain the reason behind No.6's resignation, and that would be to use the computer in the Cypher Room, the same computer which was used to compute a daily prognosis on No.6 in It's Your Funeral, again credit to ZM72. The facts of the Prisoner's former life could be fed into the computer, and perhaps then a probable prognisis of why the Prisoner resigned, would in all probability be produced. After all, the Prisoner's whole life had been researched and computed for A B and C, No.2 could have gone a step further and had a prognosis report carried out on why the Prisoner-No.6 resigned. It might have saved No.2 a great deal of time and trouble!

I'll be seeing you
Posted by David Stimpson at 08:33