What Life In the Village For No.1? 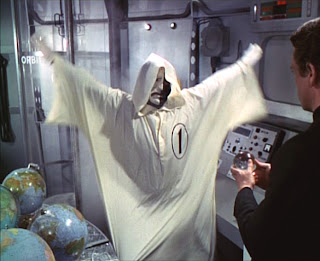 No.1 could hardly go about the village dressed like this could he? After all he'd stick out like a sore thumb, people would whisper "That's No.1" as he passes by, but even at that they would not know who No.1 is, as he hides behind his anonymity. Anonymity being the best form of disguise with very important people!
But where exactly does No.1 live? Surely he cannot spend all his time in the control room of that rocket?  And does he permanently wear that black and white mask, if he does, it must be difficult at meal times! And if he doesn't, then there must surely be those who have seen him without his mask, and know his identity. Unless of course No.1 only removed his robe and mask in the privacy of his own living quarters. After all No.2 may have his own residency in the village, but that is just an office, there are no living quarters in the Green Dome, save for the annexe round the back for the . No.2's living quarters is somewhere beneath the Green Dome. After all No.2 in A B and C rises up through the floor in his chair, still wearing his pyjamas. So it's possible that No.2's living quarters are next door to No.1!
So Iwould suggest that No.1 is No.6, they being one and the same, not quite a doppelganger, or clone, but each the alter ego of the other. Is that how No.1 enjoys the fruits of the village, through his alter ego?
Be seeing you
Posted by David Stimpson at 08:16