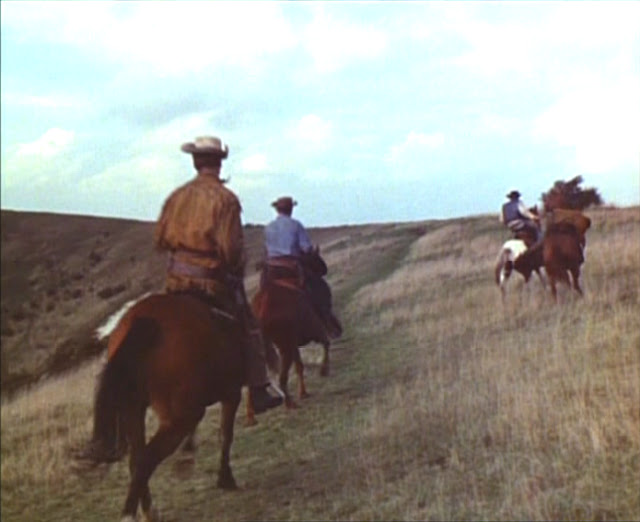 To say that the Village has no interest in the happenings of the outside world would be a falsehood. Here four horses out of the Village Stable are exercised on the South Downs, in readiness for the Harmony Stakes. Ahead is Bantling Boy ridden by Tommy "two guns" Tucker, second is Number Six a three year old chestnut ridden by T.H.E Prisoner. Third in line is Earl Gray ridden by T. Brewer, and last is a two and a half year old chestnut, Prancing Dandy ridden by Frank "shoot em up" Maher, who is much fancied.
The Harmony Stakes is a four furlong race around the town, starting outside the Town Hall, and finishing outside the Silver Dollar Saloon. The Judge presides over the start, and first past the winning post isn't nessecarily the winner! Last year Prancing Dandy won by three disqualifications, Indianna Jones for over use of the whip,  Jed Snort failed a drugs test, and Tommy "Two Guns" Tucker for over use of his pair of Colts!
So place your bets ladies and gentlemen, and may the best horse and rider win.

BCNU
Posted by David Stimpson at 09:28