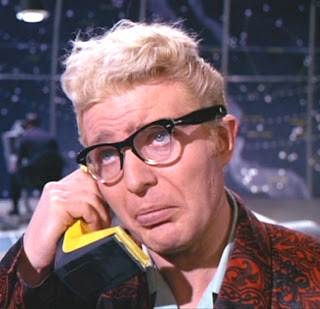 No.2 Denies Lip Implant Operation!     by our own reporter
It was denied to day, after much speculation, by an interim, the soon to be new No.2, that he has not undergone a lip implant operation carried out on his bottom lip. The heir presumptive also denies the possibility that his name is Alan Tracy! Yet the likeness of No.2 to that of Thunderbirds Alan Tracy cannot be denied, only by No.2 it seems. "These rumours and allegations" No.2 told me in an interview yesterday "are absolutely ridiculous, and are the cause of mere speculation about me on the part of citizens who have nothing better to do than sit about gossping. If the citizens of this our fine communtiy have nothing better to do all day than to gossip about my lower lip, well I'll find something better for them to do, something which will leave little time for gossiping!  I can tell you that before I was seconded to the Village, I was in the Gestapo, and SS officer as a matter of fact........no, I didn't say that. If you quote me I'll deny it with my last dying breath!" {True good citizens, this No.2 is the former Gestapo SS officer Major Non Hapen in the film Where Eagles Dare}.

So there you have it readers, a complete denial from Major Von Hapen No.2 the heir presumptive, that he is not Alan Tracy, a puppet! A plainer denial one could not be given, but will it be enough to stem any speculation about this cruel, and vindictive ex NAZI? Because deny it all he likes, there is more than a likeness between this interim No.2 and Alan Tracy. So much so, that after looking though the Department of Visual Records, I have discovered that in the early 1990's a fan of the Prisoner actually took a Thunderbirds puppet Alan Tracy to the annual conventions here in the Village!
This interim No.2 has also bee nominated for the most irritating man in the Village award. I mean what person pulls such "facial expressions" as this so termed heir presumptive pulls while on the telephone to No.1, I certainly do not, the Supervisor-No.28 doesn't, and I don't know of anyone else who does. And those "Joe 90" spectacles, and the matter of how often he takes them off and puts them back on during an interview with No.6 that time, irritating man! And he's such a crawler, "No sir, no, no, just the way you ordered it, the people are gathering now, it will be very spectacular. Nothing can go wrong now. I'll stake my future on it.....Well thank you sir." Is this the way No.2 behaved in the Gestapo? Well they would not tollerate failure, and neither will No.1! I did go on to ask no.2 if he was a true aryon, or was his blonde hair out of a bottle........and so it is with the kindness of the heir presumptive No.2, that I am allowed to complete this article from within the confines of my cell, he said it would help pass the time! Outside the crowds gather for the "Appreciation day" ceremonies. I can understand how easy it will be for Majot Von Hapen the new No.2 to carry out mass reprisals, to purge the Village of it's malcontents, no doubt it will remind him of ze old days! This new No.2 is a thoroughly nasty piece of work, and if I survive I can only hope that this article is not suppressed by the new regime. Yet survival depends on success, and by what I heard, No.6 is doing all he can to "head off" an assassination/execution plot concerning the retiring No.2, that will in turn bring about a purge of the Village. I can only hope No.6 is successful in his endeavour.

Our own reporter
Photographs from the Department of Visual Records
Posted by David Stimpson at 08:53