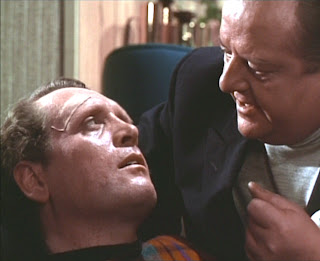 "Time for our little talk Number Six."
"Talk?"
"Yes, now that all your aggressive tendencies and anxieties have been expunged...let us say forever, I know you'll be free to speak."
"Feel free to speak?"
"Yes, particularly about that little incident which has been causing you so much distress."
"Well that's true, it has been on my mind for some time now."
"Yes, well that's perfectly understandable under the circumstances my dear fellow. So perhaps now is the time to relieve yourself of such a heavy burden."
"You think so?"
"I just said so didn't I?"
"Please don't be angry."
"I'mmmmmm not angrrrrrrrryyyyy my dear fellow. That is how things appear to you."
"I've been to the hospital."
"Yes, that's right."
"The doctor said that my haemorhoids are much better."
"The doctor said what?"
"You're getting angry again."
"I'm not angry."
"I'm irritating you."
"I'm not irritated! Now isn't there something you want to get off your chest?"
"Yes, yes there is."
"Good."
"It's Number Eighty-Six."
"What about her."
"She's very attractive. Looks more feminine in that blue dress of hers."
"I'm not concerned with Number Eigty-Six!"
"I didn't think you were."
"What about the matter of your resignation?"
"I'll hand it in in the morning if that's alright."
"It isn't alright. You've resigned already!"
"Have I, I don't recall......... Oh I remember."
"Oh you do do you."
"I just said so didn't I?"
"Yes, yes you did."
"I resigned prematurely. It was a question of time you see."
"Oh yes, time, that was it was it?"
"I couldn't stand my job, and I needed time to think."
"Ah, now we're getting down to the nitty-gritty."
"I suddenly feel very tired."
"You certainly look very strained. The haemorrhoids playing up are they? Lie back and rest, lie back and rest, we can continue our little chat later on."
"The doctors a bastard! I didn't have hemaroids until I went into hospital. That bloody doctor gave them to me!"
"You shouldn't worry Number Six, you should see what he's done to Number Thirty-Four, he's still not got over the shock yet!"