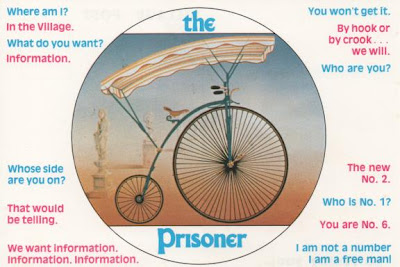 I've always been amazed that the identity of No.1 is given away so easily within the first few minutes of the series, of course it all depends on the emphasis put on the word you. This when the Prisoner has been so reluctant to give up further information, causing fans to form their own opinions, to formulate their own ideas of what the series is, and putting their own interpretations to certain situations within the series.
Patrick McGoohan once said that you could put 1,000 people together in a room, and each could come up with a different take on the Prisoner series, and they could all be wrong, yes he did say "right," but that's how McGoohan plays with the mind through the Prisoner, as those same 1,000 people could also be wrong!