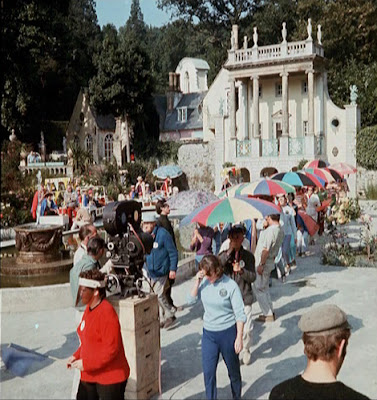 The picture on the left is taken from the Carnival Parade of Dance of the Dead. See the woman in the forground, and in the above enlargement, could that not be Nadia Rakovsky? No, I don't mean actress Nadia Gray, but the woman who stood in for Nadia Gray in the evening scene during The Chimes of Big Ben, when No.6 put his arm around Nadia as she explained how she knows the location of the Village, and offering her own plan of escape to No.6, of the small fishing Village and her contact man, who will help them......... It is certanly not Nadia Gray Patrick McGoohan puts his arm around in that scene. So, if this woman is not a local film extra at Portmeirion, but is part of the production crew, she might have been Nadia Rakovsky in that scene shot at MGM Studios at Borehamwood. Of course I have no proof, and the evidence is speculative. But there is a slight resemblance to Nadia Gray, wouldn't you say?