Postcard From the Village 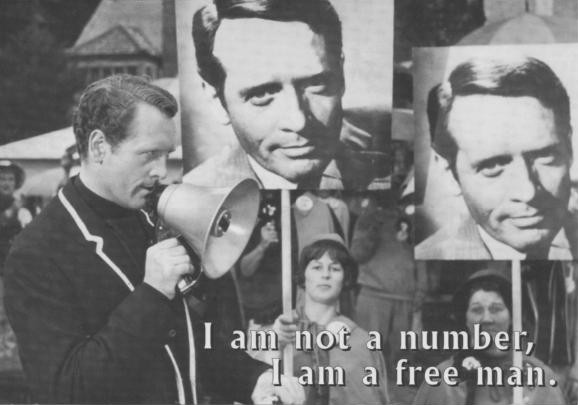 "Vote for me, I'm for you......" No.6 once said. Well I'm not so sure that I would, although he did ask some pertenant questions, like who is standing beside you now? He stated that he was going to discover who the Prisoners are and who the warders. He spoke of dying here like "rotten cabbages," and talked about having knowledge protected or extracted. But everyone applauded him, so did I. In The Tally Ho No.6 spoke his mind, and said that the security of the community will be his primary aim, and said that he has every confidence in his chances. "I admire No.2 as a man and I pay tribute to his achievements. But the time has come for change." I'm not sure that the citizens of this community are ready for change. If it's not broken, don't repair it, that's what I say. I don't know whether or not to believe No.6 when he speaks of "Putting the well being of the community above everything else." Apparently he did not seek the opportunity to "run for office," but accepted the call when it came. "Cards on the table" is No.6's motto, the elections an oppotunity and freedom for all. Freedom? What would I do with freedom? The man's talking through his hat!
No.6 attended the dissolutionment of the Town Council, at which he accused them of being "Brainwashed immbiciles," incapable of laughing, crying, or of thought! He wanted to know who elected the members of the Town Council? Well I guess No.6 can think himself fortunate in not having been co-opted onto the Town Council himself. I can only hazzard a guess that those members of the Town Council are ex-No.2's who have paid for their failures, each standing at a rostrum that has a sub-divided No.2 upon it No.2a - No.2l {L}.
Later, in a speech given from the Stone Boat No.6 addressed the gathered citizens about taking part in the most hazardous sports, well I've never been very athletic, and that we can enjoy ourselves and we will, saying that the price is cheap! Well if we have to start paying for these civilised amenities within out boudaries, I'm not so sure about it. I like the part where No.6 said I was eligable for promotion to other spheres, I'd be up for that. Emptying dustbins everyday isn't all it's cracked up to be you know. As for the desire to go anywere, strangely enough I've none. As for my desire, well that Nadia Rakovsky-No.8 is a bit of alright.
In his final speech No.6 talked about placing trust in the old regime, that the qualities are defined, the future certain, the old regime forever, and the old No.2 forever. Sounds good to me, and again, if it's not broken, don't fix it. No.6 then went on to ask us to stand firm on this electoral platform and dare to speak a word witout fear, that word is freedom.
So according to No.6, what it all boiled down to was "freedom against coercion,"
This was the last of the "free elections" here in the Village. Because by the time of the dance of the dead, democracy here in the Village had been dispensed with!
Vote for No.6? No, I didn't vote for No.6. Well I've never been one for change. I looked on with suspicion outside the Town Hall when the new No.2 stood there on the steps. As for everyone else, well everyone votes for a dictator don't they. "Obey me and be free" were the words of the new No.2 that boomed out over the Village. "You are free, free, free to go, obey me and be free!" No-one listened. No-one cared for this new No.2's sense of freedom. We just went about our daily business and forgot about the whole affair. It was as though the election had never taken place.

Be seeing you
Posted by David Stimpson at 09:50