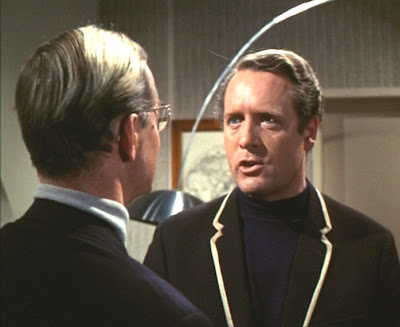 "It's a great experiment Number Six. You can learn a lot."
"When was the treaty of Adrianople?"
"How should I know."

"Alright, lets try something a little more simple. Who was Bismark's ally against the Danish Prince Christian of Glucksburg?"
"The Dutch?"
"Can I ask you Number Six........"
"Ask me anything you like."

".........Were you sititng in front of your television set a few minutes ago?"
"No. Should I have been, something good on was there?"
"You missed the lecture!"
"Did I?"
"You're about the only person who did."
"That must make me pretty unique, wouldn't you say?"
"It certainly puts you at the back of the class!"
"History never was my subject."
"Yeeeeeessssss. Well thank you Number Six. Your help has been invaluable as ever."
"In what way?"
"Tell me. are you as keen as ever to leave us?"

"Any more questions?"
"I thinking that a compromise could be arranged in exchange for the Professor's tape recorder. He's lost it you see, with all his notes."

"Absent minded is he?"
"You astonish me Number Six, you really do. If only you would show a little effort."
"Is that my end of term report?"
"You're never too old to learn Number Six."
"Is that the solgan for your new educational programme?"
"Don't underestimate me Number Six."
Posted by David Stimpson at 09:01