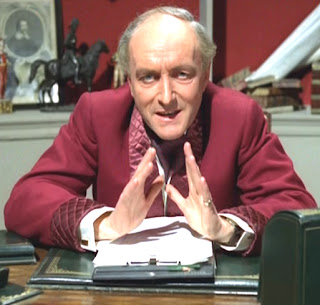 Ladies and gentlemen my lecture today concerns the 1972 Emmy award winning Spanish film La Cabina, in which a man goes into a telephone box, presumably to make a telephone call, the door closes behind him and the man is trapped inside. In time a crowd gathers, and a number of people attempt to get the door open and release the man trapped inside. Two policemen arrive on the scene and they try to get the man out of the telephone box, and fail, as do the fire brigade when they arrive. But then the telephone company arrive and remove the telephone box with the man still inside.
It's a long journey into the mountains, and this man still in the telephone box, riding on the back of a lorry is not the only man on such a journey. Finally the lorry arrives at a depository inside a mountain. The telephone box, still with the man inside, is removed from the back of the lorry by crane and is taken deep into the horrors of the depository, where others have been taken. Telephone boxes which contain dead people, decomposing corpses, and age long skeletons........why? Trying to figure out La Cabina  makes trying to figure out the Prisoner look like child’s play! Watch for yourself by clicking on the link below, or if that doesn't work, type La Cabina in Youtube's Search box.
<iframe width="420" height="315" src="http://www.youtube.com/embed/isIgZ81lfnM" frameborder="0" allowfullscreen></iframe>
The Professor
Posted by David Stimpson at 08:12