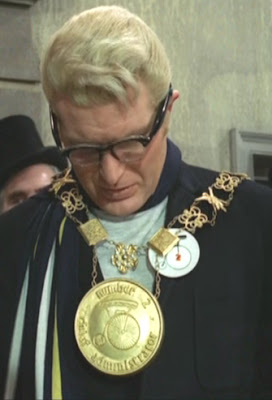 It could have ended very nastily to say the least. It's no wonder that the new No.2 rushed through his acceptance speech, knowing that there was a bomb hanging about his shoulders!
We can imagine what the effect would have been on either one of the No.2's, he would have been blown to pieces, his blood, flesh, guts, and shattered bone showered all over that balcony, and all over the Top Hat adminitrators standing there. And perhaps some of them might well have been injured in the explosion, had the plastic explosive bomb have been detonated. Although I suppose that it is possible that the amount of plastic explosive had been calculated so that it would cause a small explosion, to cause the minimum of carnage, seeing as how the new No.2 would also be standing on that balcony.
But what would the immediate effect of the assassination, replace execution, have on the on-lookers, the citizens attending the Appreciation Day ceremony? It would have been a frightening sight, traumatic even, to see a man blown to pieces!
Had the assassination/execution plot been successful, and the mass reprisals having been carried out on the so called 'innocent' citizens, because is anyone in the Village innocent? Because everyone is in the Village for reason! But I bet nothing would have happened to No.6, dispite being top of the bill of malcontents. After all, No.6 did try and stop the assassination, and that would have gone in his favour.  Be seeing you.
Posted by David Stimpson at 09:03