We Thought You Would Feel Happier As Yourself! 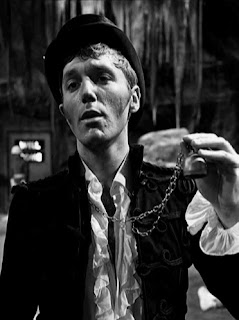 It was not only the Prisoner-No.6 who was allowed to wear his own suit of clothes in Fall Out, so too was No.48, pictured here on the left. Top Hat, frilly shirt, military tunic, as was most popular back in the 1960's by trendy young men living in London, and a pair of white boots.
He may wear a bell around his neck, a flower in his Top Hat, but what happened to No.48 to bring him to the Village in the first place? What circumstance could it have been to see No.48 brought before the court of Fall Out? Was it a form of 'Ultimate Test,' and if it was, what form might it have taken? What's more, who was it carrying out that ultimate test against 48, because No.2 was locked away with No.6 in the Embryo Room!
Was the promise made to No.48 for him to meet No.1, as it was to No.6? Whatever it was that brought No.48 to the current state of affairs of Fall Out, like the Prisoner-No.6, he too was allowed to wear his own suit of clothes. Why not so the 'late' No.2? Well obviously he hadn't time to change, seeing his own situation clearly made that impossible!       BCNU.
Posted by David Stimpson at 09:04