The Schizoid Man & Thought for The Day 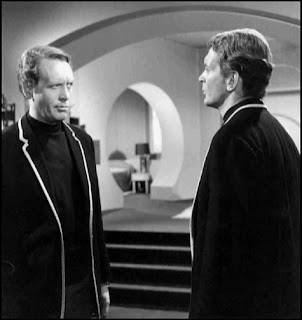 One observation regarding The Schizoid Man would be that No.6 does actually wear his badge, if ever so briefly, and just because it suits him to do so. Another observation would be, that Frank Maher, Patrick McGoohan's stunt double on the Prisoner, acted the role of both No.6 and Curtis just as mush as Patrick himself. Yet Frank went uncredited for the roles.
Thought For The Day - Just when did No.6 start going about the Village wearing a cream blazer with black piping? Didn't citizens who knew No.6 not notice that he was wearing his numbered badge, something he had refused to do since the day after his arrival in the Village?
BCNU
Posted by David Stimpson at 08:16