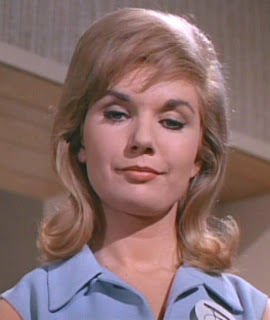 Having watched A Change of Mind the other night, I have arrived at the conclusion, no matter how attractive, how feminine No.86 appears, she has a heart of stone!
I am aware that both doctors No.40 and 22 want to experiment on No.6, would like to discover his breaking point, and that No.86 didn't actually go through with the operation of carrying out a locotomy on No.6, the isolation of the aggressive frontal lobes. But there are many patients whom have been put through that operation, No.6 met with one in the hospital, who considers himself one of the 'lucky ones!'
No.86 maybe no better, possibly worse than her fellow doctors, she might even have developed the supposed humane was of carrying out a locotomy, but she is also an individual! Individual in the way she wears her own dress and white high heeled shoes, rather than the usual hooped jersey, slacks, and flat shoes. Or the uniform of a doctor, white coat, grey polo neck jersey, skirt, and sensible flat shoes. So 86 maintains not only her individuality, but also her femininity!  Oh by the by, the blue dress Angela Browne wears for her character of 86, is one she also wears in the film Press For Time with Norman Wisdom, and in an episode of Man In A Suitcase - Man From The Dead!   Be seeing you
Posted by David Stimpson at 08:29