The Birth, Death, And Escape Of The Village Guardian! 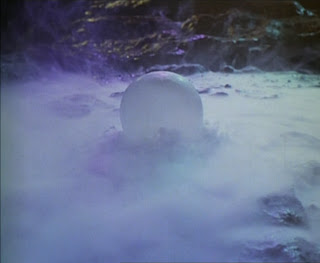 This moment, taken from Fall Out, has been decribed by some fans of the Prisoner as the death of 'Rover.' It also gives the impression that the Village Guardian is an alien creature, on some alien planet, certainly in some alien environment! Well if this is the death of 'Rover', then surely this next moment, seen in the picture below must be the birth of the Village Guardian. It is an image we see each time the Guardian is released from a containment area somewhere at the bottom of the sea, at the command 'Orange Alert.' 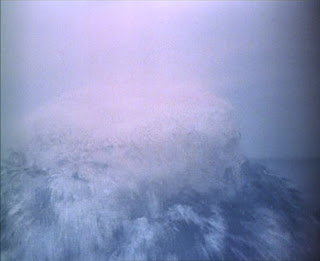 Well there we have it, if one chooses to take to two   such interpretations. Yet there is another, seeing as the image on the right is also taken from Fall Out, which could represent the escape of the Village Guardian! well No.1 and No.6 escaped the Village at the same instant, and if you watch the film carefully, so does Rover!
However there is a third picture to consider, again taken from Fall Out, and it follows below. I've never been able to make head nor tale of it, despite it appearing seconds before the death of Rover. What it's doing in the silo from which the rocket has just blasted out from I don't know. 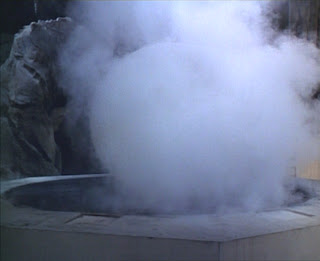 Certainly there's plenty of steam or vapour about, suggesting 'it' could be suffering as No.48 and the 'late' No.2 suffered, strapped to those steel piston type devices, with steam or vapour being exhausted every few seconds. Well that's just my own interpretation, you the reader will have your own no doubt.
I like to think that a segment of Village Guardian was released at the time of the evacutation of the Village. Because I'm quite sure that seeing as the Village remained intact, after the evacuation it could not remain unprotected. That some security device would have to remain in place, that the Village Guardian would continue to serve and protect.
I'll be seeing you
Posted by David Stimpson at 09:13