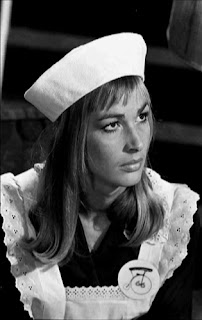 This is the Prisoners personal maid Number Sixty-Six who is charged with the task of gaining information from the Prisoner. She tells the Prisoner that they might let her go if he gives her some sort of information, making herself seem pretty vague on the matter. But the Prisoner is not taken in by her, nor by the crocodile tears she sheds, and despatches her from his cottage, telling Sixty-Six that her services will not be required tomorrow!
Now where am I likely to see that number again? Why on the badge pinned to the Naval cap worn by the ex-Admiral in the same episode!

Later in Arrival Number Six is playing chess with an ex-Admiral, but his mind is not on the game. Number Sixty-Six who advised Number Six to try the boat, she's great in any weather, sailed her many a time, have a good trip. And later, while Number Six is attempting to escape the Village by helicopter, the ex-Admiral offers a game of chess to Number Nine, who doesn't play chess, so the ex-Admiral volunteers to teach her. 'We're all pawns he tells her' somewhat enigmatically. 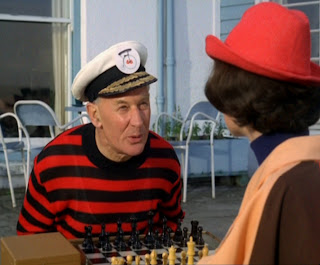 You will be pleased to observe that in this picture the ex-Admiral is wearing, what I am pleased to call, the possitive badge, that being a black canopied Penny Farthing badge on a white background, with a red number. 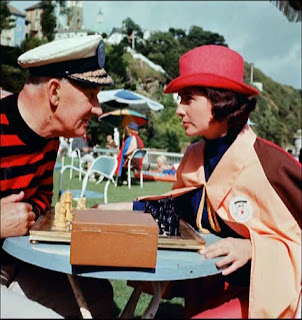 Yet in this next picture, a side view of the same scene, the ex-Admiral has, what I am pleased to term as a negative badge pinned to his Naval cap. That being a white canopied Penny Farthing on a black background, but still with a red number! It's just a pity that the number on that negative badge cannot be made out, but unfortunately this is the only picture. Fictionally speaking, the reason for the two numbers Sixty-Six, would be that the maid has been removed. But then that would not explain why the ex-Admiral has the same number later in Arrival, because the ex-Admiral is older than the maid, and if anyone should have the number Sixty-Six first, it would be the ex-Admiral, surely!
But really, in actual fact, there's been a cock-up on the continuity front. While the ex-Admiral {played by Frederick Piper} wore the number Sixty-Six badge in Arrival while on location at Portmeirion, the maid {played by Stephanie Randell} wore the same numbered badge, Sixty-Six, while filming on set at MGM Studios...............Why the different badge worn by the ex-Admiral in the same scene? Well perhaps in a rehearsal for the scene the ex-admiral was meant to wear the black negative badge, then perhaps he lost it, it dropped off the Naval cap, to be replaced by the white positive badge. So perhaps the original intention was for the ex-Admiral to have the black negative badge.   Be seeing you.
Posted by David Stimpson at 09:00