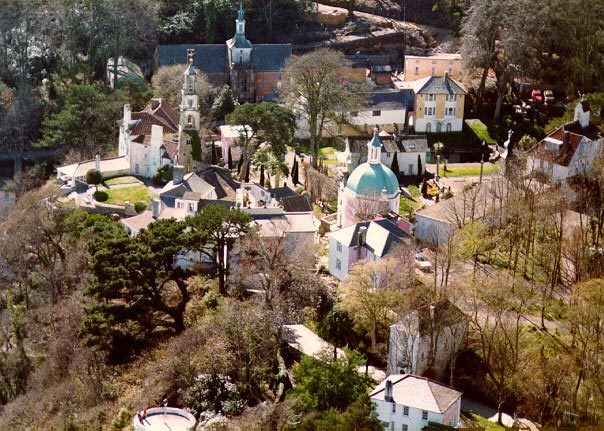 I have a tale to tell, and it is this. It happened in 1988, when I was staying at Portmeirion in Lower Trinity Cottage. After returning to my cottage from a walk in the woods, and exploring the paths along the cliffs, I made myself a pot of tea, laid out several buscuits on a plate and settled myself down on the sofa to watch some television. I had only been sat down for a few moments when I thought I heard the outer door of my cottage open, yes I was right, because the second door suddenly opened and in walked a little old lady. I was astounded, amazed. Then she said 'Is this the ice cream parlour?' 'No' I said 'It damned well isn't.' She asked me to dierect her to the Ice Cream Parlour. Well she was a little old lady, and I wanted her out. So I helped her outside and directed her to the Ice Cream Parlour. Now I was only gone a matter of moments, literally moments you understand but hadn't locked the cottage door behind me, well I didn't see the need.
I returned to my cottage, but when I got there I got the shock of my life........because there they were, a man and a woman with their two children in my cottage! What's more they were drinking my tea, and eating my buscuits...bloody cheek! I asked them who the hell they were, and what they were doing in my cottage, didn't they see the sign saying Private? They said that they had seen me leaving with the little old lady, and thought that I was here in Portmeirion to show people, what it was like to live here.  What! No I'm damned well not! I do live here, and this is a private cottage, now get out I told them, which they soon did apologising all the way!     BCNU
Posted by David Stimpson at 08:34