This is actor John Whitely, 93, an old man who lives in the Village. He was being chased by arrmed Guardians and barking dogs in the opening sequence of Arrival.
The idea behind 93 is that he is either the former No.6, or a representation of the former No.6, either way I think this idea works. I don't see anyone else wearing the old style of piped blazer in the new Village, no-one except 93. 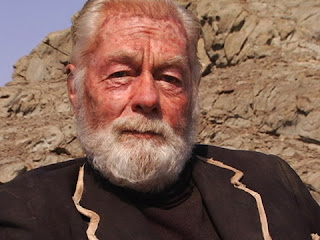 As legend has it, Patrick McGoohan was offered a cameo role in THEPRIS6NER, but turned it down, either through illness or because he wanted to play the role of Two, which had already been cast to Ian McKellen.
I think John Whitely makes a very good representation of the former No.6, and that is how I like to think of 93, who is described in the Village as a drunken old man. Well I tell you what, if I'd just managed to escape the one Village, only to wake up one day in a another place, another Village, or indeed taken from the one Village to the other....I'd have a beer or twelve as well!    Be seeing you.
Posted by David Stimpson at 08:35