No.6 In Round The World Record Attempt!

Not for the first time we see No.6 taking part in another audacious plan. This time to try and fly round the world in record time, aided by a team of experts, which is headed by the Colonel, who himself is aided by Thorpe, and an RAF Group Captain who will fly the aircraft, while No.6 acts as navigator and time keeper during the flight. Here they are, in the Kitting Out Room at the aerodrome, just minutes away from flight time. 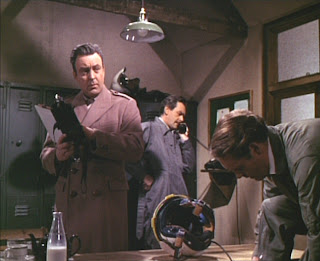 This is not the first time No.6 has been involved with an aeronautical project. Some time ago he was involved with an attempt on breaking the air speed record by helicopter, because No.6 couldn't get away fast enough! Which was a failure. But that didn't stop No.6 from 'having a go,' because soon  after he was sailing arond the world on the Amis Reunis or Stone Boat. Making an attempt on the water speed record, and attempting to cross the Bay of Biscay by raft!
So here he is again, our intrepid hero, preparing to go off again, on yet another adventure. 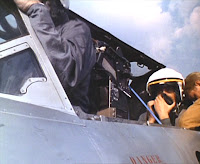 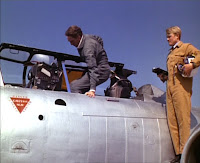 The aircraft is fuelled and prepared, a Gloster Meteor, as No.6 climbs into the navigators seat in the two man cockpit, with the Group Captain makes last minute checks, before climbing aboard himself. 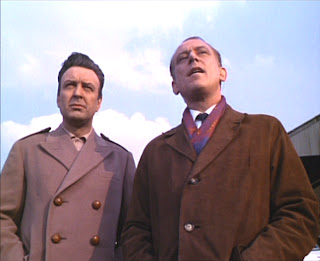 Both the Colonel and Thorpe were on hand to see the commencement of this, the final phase of the project. Evrything is set. The final checks made. Flight clearence has been given, while refuelling at RAF Gibraltar has been given. 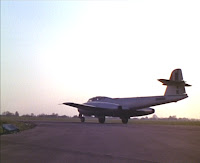 'He's an old, old, friend who never gives up' the Colonel tells Thorpe. The two twin Rolls Royce Derwent 5 Turbojet engines are fired up, and the Gloster Meteor jet aircraft taxis to the end of the runway. The Colonel and Thorpe look on and give a cheery wave to their old friend. 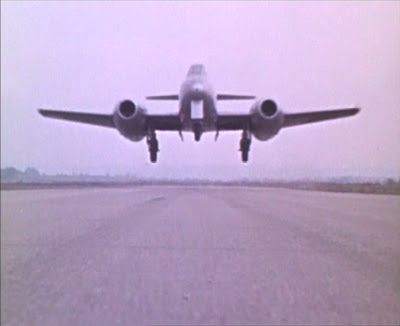 Just as the aircraft takes to the skies, the Colonel and Thorpe return to their car, and take their leave of the aerodrome, perhaps with but one thought in their minds, when next might they see their old friend and ex-colleague again? 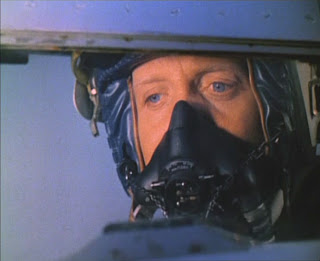 A few days later, it was reported that contact with the Gloter Meteor had been lost. That it is possible that the aircraft, and crew had been lost at sea. A search had been instigated at the command of the Colonel, but so far there has been no sign of any wreckage, or the crew. But the search will go on, but hope is now fast running out for the two man crew of the aircaft.       BCNU
Posted by David Stimpson at 10:02