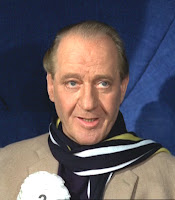 He is perhaps the most hands-on No.2 when concerned with No.6. This No.2 is a statesman style of figure. He knows that No.1 may no longer be a mystery to No.6, if he sees what he means, and if he's elected in the first place!
He guides No.6 through all the stages of the election. Overseeing at all times that the tissue is not damaged, because he knows just how far he is allowed to go with No.6! He is cunning, has gile, and encourages No.6 to stand for election against him, and it takes little encouragement to persuade No.6. What's more it is known exactly what No.6 will do should he be elected. So it is seen that he is.
No.2 can also fly a helicopter, and take charge when No.6 attempts to escape by jet boat. No.2 gives chase in the helicopter, and tries to persuade No.6 to turn back before it's too late. Of course No.6 doesn't listen, and it is No.2 who is forced to go back to the Village, after initiating a southern perimetre alert. Yet later, No.2 flies himself out of the Village, now that his term of office is at an end, and is in all probablity the only No.2 to do so. Thus proving that No.2 does in fact leave the Village, and isn't simply retired into the Old People's Home!
This No.2 is also something of an individual, and shows his individualistic tendencies by wearing a jacket of his own choosing, not one of the usual single or double breasted blazers as worn by both his predecessors, or successors.
Once, in the Therapy Zone, No.2 plays the role of an alcoholic, and at one point he gives the toast 'To hell with the Village!' I've never been sure if No.2 was expressing a true feeling towards the Village or not. After all there is no surveillance in the Therapy Zone, and only two people would have witnessed the toast, which later No.2 could have denied if cause to do so, claiming to have been under the influence of alcohol - well perhaps not!
I suppose there are a couple of questions still outstanding concerning this No.2. One would be how is it that No.2 arrives almost instantly after the telephone call from the Control Room? And secondly, as No.6 is about to embark on his latest escape attempt, by jet boat, why is it that No.2 is already flying the helicopter before giving chase to No.6?
Be seeing you
Posted by David Stimpson at 08:56