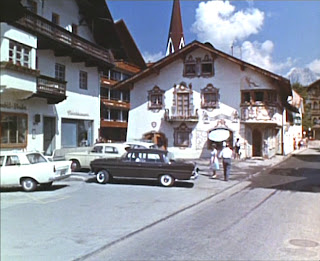 This is a picture of......well in Do Not Forsake Me Oh My Darling its Kandersfeld, a Village in Austria, which doesn't really exist of course. 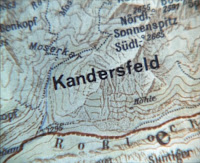 This frame of film on the left, is taken from that of the Prisoner/Colonel drives into Kanderseld along the main street of the Village. Then after a shot of the Prisoner.Colonel in his Lotus, and then the film in Kanderfeld continues, from which this next frame is taken. And no, before you ask, I've not been messing it about! 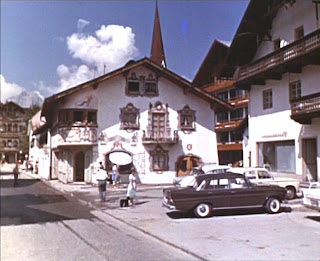 I'm sure you have noticed that the second short film of Kandersfeld is the same as the first piece of film, yet mirrored! Note the cars in the above frame of film, together with the man and woman. The dark car in the top frame is just parking, as it is in the bottom frame. But then look at the woman, she has a dog with her, and the man has walked a few paces away along the street. To complete this film sequence, the next shot is re-mirrored, as in the top frame. This is yet another hole in the low budget production of Do Not Forsake Me Oh My Darling. Perhaps they thought no-one would notice, and even if they did, who cares, which could also be said of this next frame, which is shown as Potter is approaching Kanderfeld. 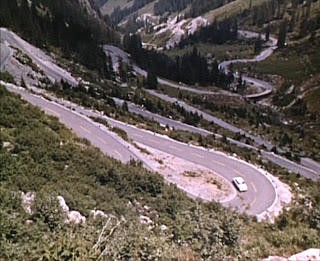 Because this short piece of film, from which the frame on the left is taken from, was also used in the Jamed Bond film Goldfinger. For those fans of the Prisoner who didn 't already know that.
I'll be seeing you
Posted by David Stimpson at 10:09