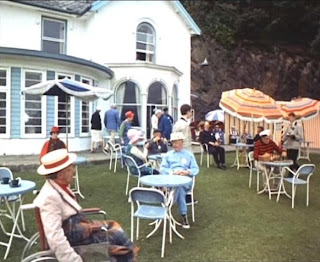 Here is an everyday scene on the lawn of the Old people's Home, and there's No.66 an ex-Admiral, setting out his chess pieces, as he waits for a chess opponant. 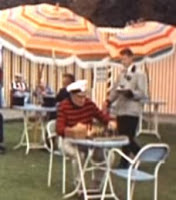 You might think that this two pictures were taken from surveillance film footage taken on the moring of the Prisoners arrival in the Village, and of course you would be absolutely correct, save for one small point, they actually come from a much later episode of the Prisoner's ordeal in the Village, that of It's Your Funeral. And that just highlights the fact just how much later episodes such as It's Your Funeral and to some extent, A Change of Mind, relies upon stock film footage from previous episodes, although A Change of Mind relies more upon sets built on a back lot at MGM Studios. Mind you looking at No.66 in a fictional sense, he has been most fortunate in having been looked after or so long. Well they do you know, for as long as you live that is. It's just a pity that the Ex-Admiral, played by Frederick Piper, isn't seen playing chess with No.6 during the filmed daily prognosis report on No.6. But then again that's not No.6 in the next photograph! 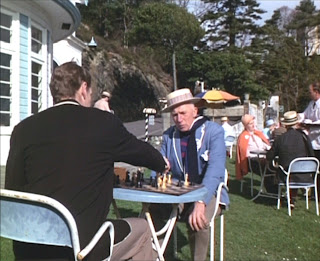 This is Frank Maher, Patrick McGoohan's stunt double, playing the role of No.6 for the Prognosis report, however the next frame of film you will see, is No.6-Patrick McGoohan, taken from Arrival and used in It's Your Funeral to make you think that the guy in the picture is No.6-Patrick McGoohan. Mind you, there is the scene during No.6's daily progonisis report, when he's using his private gymnasium in the woods, and that's not Patrick McGoohan either, nor is it Frank Maher for that matter........No, I don't know who it is, although I have tried to discover who he is.
BCNU
Posted by David Stimpson at 09:08