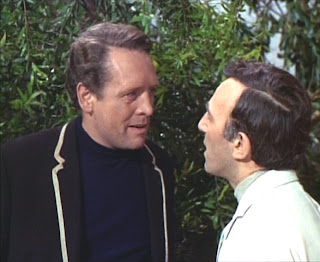 Number Six, who has just attended a meeting of the Social Group, which is designed to help citizens like Number Six who have been posted Unmutual, a meeting which he successfully distrupted to the point of actually having broken up the meeting, then takes leave himself through the bushes. He is then confronted by a medic. 'Ah, Number Six! Just in time for your medical.' The question is, what is this medic doing lurking in the bushes, and what's more, he's not alone! 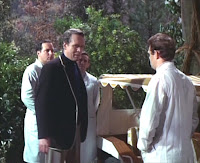 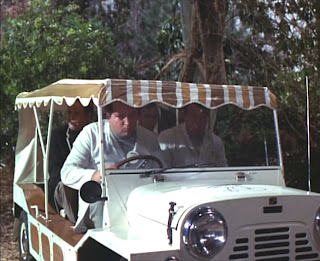 A song does spring to mind at this point, about someone being taken away to the funny farm by men in nice white coats, he, he, ha, ha, they're coming to take him away!
I realise that the medics would know where Number Six would be, as so to collect him for his medical. Perhaps they didn't want to break up the meeting of the Social Group, and so were simply waiting there in the bushes. But the way Number Six walks right into them, well it seem so inexplicable, as my first and immediate thought was, what's he doing lurking in the bushes?    Be seeing you
Posted by David Stimpson at 08:04