We Thought That You Would Be Happier As Yourself! 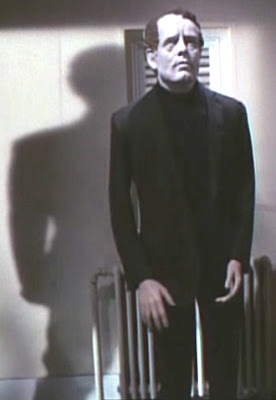 At the time of the Prisoner's medical examination in Arrival, he asked about his own clothes, when told that he'd be given new ones. 'What about my old ones?' the Prisoner asked 'They've been burnt.' the doctor informed him.
Now why should the Prisoner's old clothes be burnt? Was it a case of the possibility of contamination of some kind? Most unlikely. But then upon leaving the Examination Room, the Prisoner looks in through the window of the Aversion Therapy Room. There, at the far end of the room, is a baldheaded man, uttering some incomprehensible jibberish, wearing the Prisoner's own suit of clothes, why? What's more, why did the doctor lie about the clothes having been burnt? Because clearly they weren't, as they turn up again in Dance of the Dead, specially delivered for the occasion of the Ball to be held in the Town Hall that evening. But soon after which,  the Prisoner's own clothes were taken away from him for a second time, stored somewhere until it was time to bring them out again in time for when the Prisoner would be his old self once more. Or at least when it was time for someone else to play the role of the Prisoner in Do Not Forsake Me Oh My Darling, the Colonel.
But the Colonel {Nigel Stock} is a different size to that of the Prisoner {Patrick McGoohan}, so surely it had to be a different suit of clothes which the Colonel wore. But if they weren't, how did the Prisoner's suit arrive back at the Village for them to adorn the dummy pictured here? After all when the Colonel was brought back to the Village from Kandersfeld in Austria, he was wearing a different suit, white shirt, and tie. Not attired as the Prisoner had been, although technically he was still that person, until Professor Seltzman put them through the mind transference for a second time. But thinking about it, perhaps the person who returned the Prisoner's Lotus 7 back to London, brought the Prisoner's own suit of clothes back with him to the Village, always providing that the Colonel had brought them with him on his journey to Austria in the first place. Either that, or collected from the Prisoner's London home. In any case, there they were, attired on a dummy of the Prisoner, waiting for him to be his old self once more, this time for good......or so we thought!
BCNU
Posted by David Stimpson at 09:04