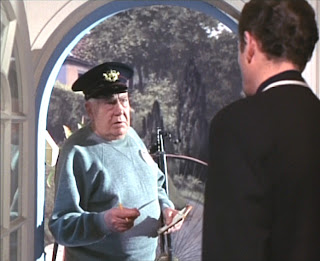 Just after the maid departs No.6's cottage, the Village Postman calls, he has a special delivery for No.6, for which he is asked to sign for 'Sign your number here Number Six.' Apart from the fact that it is No.6 standing at the door, how does the Postman know who he is, No.6 doesn't wear a badge! But I suppose in a small community as the Village, everyone knows everybody else, as was once the case with all English Villages. But never mind that, why is it that the Village Postman is wearing a Royal Mail peeked cap? I know the Ex-Admiral in Arrival wears a naval cap, and the General during The Chimes of Big Ben wore his military cap. 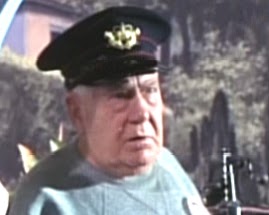 It is always possible that this man's job, before he came to the Village, was that of a Postman, and so that is his job in the Village. So they allowed him to wear his old peeked cap. Which leaves just one thing - why is he pushing a Penny Farthing about with him on his postal round? I'm quite sure he doesn't ride it. In fact no-one is ever seen to ride a Penny Farthing Bicycle around the Village, they always push it! What's more, that large painted backdrop, of just outside No.6's cottage, in the top picture, isn't fooling anyone!            Be seeing you.
Posted by David Stimpson at 08:08