A Matter Of Resignation And Consequence

So - the Prisoner having resigned his job, because he could no longer stand it, returned home through the streets of London, to his home in Buckingham Place. As he parks his car outside his house, he fails to observe a hearse with two Undertakers parked outside the house next door.
The Prisoner collects two ready packed suitcases, two magazines, his wallet, passport, and airline ticket. Meanwhile outside one Undertaker approaches the house, while his colleague opens up the back of the hearse, inside of which, there is a coffin.
The first Undertaker enters the house, obviously he has a key, and introduces nerve gas into the study via a gas gun and through the key hole of the door. Unconscious, the Prisoner's body is placed inside the coffin, which has been carried into the house. The lid replaced, the coffin is then carried outside and placed in the back of the hearse. The door to 1 Buckingham Place is closed, and the two Undertakers drive off through the streets of London - to where, to where?
There can be little doubt that the hearse is driven out of London, perhaps to some private aerodrome, where the coffin is placed on an aifcraft and flown out of the country to some unknown destination, but certainly to a landing strip not too far from the Village, from where it is just a quick flip to the Village by helicopter, much in the same way as it was for Nadia Rakovski during The Chimes of Big Ben.
The Prisoner eventually wakes up in what he thinks is his own home, but he soon finds out that the enviornment is quite different to what it is elsewhere - the Village. The rest as they say is history, because we are quite familiar with what takes place in the subsequent seventeen episodes, until the Prisoner and his chums finally escape the Village to return home. Oh blimey look out!
It is at this point in Fall Out, as the Butler, Valet, personal gentleman's gentleman, is seeing his new master off, that a hearse comes driving slowly past. 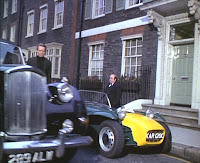 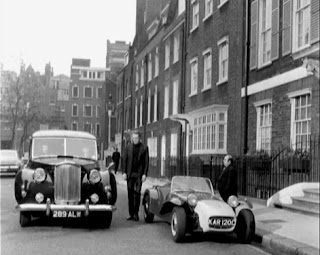 Surely this event must have given the Prisoner cause to pause. But then he need not have worried, because this hearse driving past was not for him, this time, it was for some other person. Ah, but then it is always possible, and probable, that the Prisoner would not have given the hearse a second thought. Because he doesn't know how it was he was abducted to the Village, he was unconcious at the time if you remember. The Prisoner never saw the hearse, he probably didn't give it a second thought as he parked his car outside his house having just resigned his job. And certainly he never saw the Undertakers coming. And even if he had - it would have been all too late!
Be seeing you.
Posted by David Stimpson at 08:40