It's Not As difficult As First Imagined!

'Once we get started, even I won't be able to tell you apart'
{No.2 The Schizoid Man} 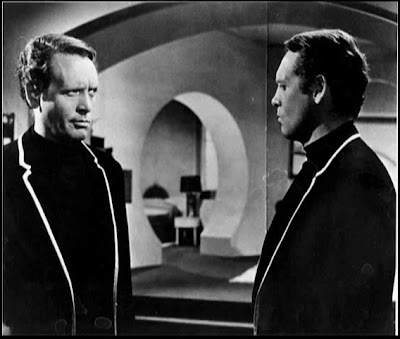 What the devil is No.2 talking about? No.6 is the one wearing the black blazer, and No.12-Curtis, who is impersonating No.6, is wearing the cream blazer, what's so confusing about that? But perhaps No.2's confusion stems from the fact that both No.6 and No.12/Curtis, were supposed to have worn identical piped blazers, as in the picture. No.2 even gave No.6 a password 'Gemini,' which I'm sure also stems from the original idea of having identical piped blazers. So it turned out it was the wrong password, according to two bully-boy guardians one evening, when No.6 was confronted and asked for the password. 'Gemini' said No.6. 'that's not the password' said one of the Bully-boys. But you see it wasn't. it was the right password which No.6 had given to him by No.2. So why then the confusion of the bully-boy guardians? Perhaps they were expecting the password Schizoid man! {Now I'm confused!}
So for No.2 to have said 'Once we get started, even I won't be able to tell you apart' makes perfect sense in conjunction with the original idea of identical blazers, but clearly not after the change of blazer for Curtis. The change was made of course, because it was thought that the situation of having the same blazer for the two 6's, would have been too confusing for the television viewer at the time. I think it was rather presumptious of McGoohan and co to presume the mentality of the television viewer back in 1967. For myself, I think the episode The Schizoid Man suffers because of the change of blazer for Curtis. Had the original idea of having both No.6's wearing identical blazers been retained, then the television viewer would not have known who was the real No.6 right up to the very last line. As it is, it's all too simple to distinguish between the black and the cream!   I'll be seeing you.
Posted by David Stimpson at 09:44