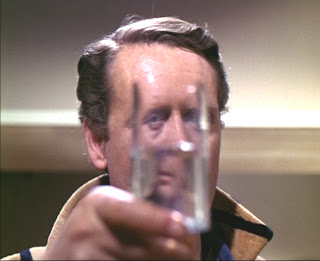 I have never been able to make up my mind, whether or not the water No.6 drank that night in A B & C was drugged!
Obviously his regular night cap of hot chocolate was drugged, that's why No.6 has never seen a night, he, like all the other citizens, just sleeps. But that last night of  A B & C, No.6 did not drink his night cap, he poured it down the sink, and instead chose a glass of water straight from the cold tap, and soon after collapsed unconcious on the floor in the bedroom. Or did he?
Would it be possible for No.6 to feign such a collapse, to appear to be drugged and unconcious? Surely the doctor No.14 would know that he was feigning. And if he wasn't, that meant the water from the cold tap must have been drugged. Yet if it was, could No.6 then control his third and final dream in the way he does, even though the drug being used against his has been diluted by No.6, he would still be unconcious. You see the dilemma?    I'll be seeing you
Posted by David Stimpson at 08:11