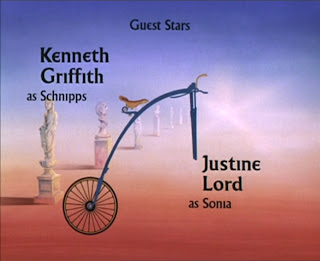 For me The Girl Who Is Death is something of a contrived episode, perhaps formerly an unused script for Danger Man. It may actually be an indication what the people behind the Prisoner were thinking about when considering the original twenty-six episode series. But we won't go into that. However, one thing is perfectly clear, that the ideas for plots within the Village were being exhausted, or at least they might not have been, had the two scripts of The Outsider and Don't Get Yourself Killed not been rejected. But with episodes such as The Girl Who Was Death and Do Not Forsake Me Oh My Darling there was a new but unsatifactory emphasis on episodes taking place outside the Village. Yes there is Once Upon A Time, but that is an episode which is out of sequence, never originally being seen as the penultimate episode of the series. Even Living In Harmony takes place to some extent, outside that of the normal Village enviornment.
I think it is safe to say, that although No.2 was still trying to gain the reason behind the Prisoner's resignation, at the very least expecting No.6 to give something away, The Girl Who Was Death is an enjoyable diversion from what has taken place, and that which is about to. The episode brings a form of light relief to the proceedings, I expect for No.6 as well as the television viewer, after having been put through the tortuous process of mind transference, and readies us for the ultimate test of 'Degree Absolute,' that is yet to come.
The Girl Who Is Death is pure escapism, a fairytale, but a dangerous fairytale none the less. It is an episode which would not be out of place as an episode of Danger Man, or indeed its quirky enough as an episode of The Avengers!
One further thing, the girls name in the episode is Death. But in the closing credits its Sonia, a name which is not once uttered in the episode itself, from which the name Sonia was obviously dropped, but not from the completed closing credits it would seem!
BCNU
Posted by David Stimpson at 09:42