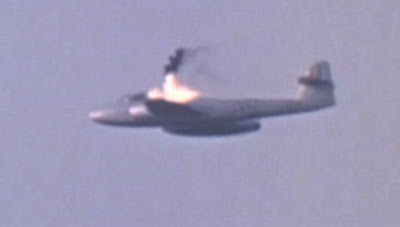 "Be seeing you" the milkman said just before he ejected the navigator- the Prisoner, out of the Gloster Meteor Jet aircraft. Nothing wrong with that is there? Well as a matter of fact the pilot cannot eject the navigator without himself being ejected from the aircraft. This I recently learned from a friend of a friend who had actually done some work on a Glsoter Meteor jet aircraft in the 1950's, he had been an RAF technician. He used to re-set the ejector seats and parachutes, and having been asked if No.6 could have been ejected out of the aircraft without the milkman/pilot, he gave a definate no.
This then would explain the original ending to 'Many happy Returns,' in that No.2/Mrs Butterworth presented No.6 with a copy of The Tally Ho upon his return to the Village. The headline of which ran "Plane Lost Over Sea. No Hope of survivors.' This would be right, because as well as No.6, the Milkman/pilot should have also found himself in the Village having been ejected from the aircraft, which would have carried on flying out over the sea before crashing. Had a search then been made for the missing aircraft, wreakage having been found but no bodies, then to the rest of the world No.6 would be dead. But what is wrong, is the fact that the lost aircraft over the sea was to have been reported in The Tally Ho. Who outside the Village reads The Tally Ho?