A Pair Of Gun Runners
Ernst and Gunther a more hardened pair of gun-runners you are less likely to meet - or are you?
True, they did come across the sea going raft with an unconscious man lying aboard it, the man who was unceremoniously dumped into the sea! His raft plundered, and then would have been left for dead, had it not been for Gunther.
For some reason there seemed to be a delay from the moment the raft was cut adrift for the launch to get underway again, as the engines were gunned, then growled, possibly sending a signal to the man floating in the water astern, and giving the man time to grab hold and clamber aboard! If this is correct it seems hardly the action of two hardened gun-runners. It is just possible that there is more to these two seafaring men, than first meets the eye, as they happily tuck into tins of Village baked beans, tea, and Pineapple chunks, sorry tinned pears!
It appears to me, that there might be the possibility that these two men are not gun-runners at all. After all a crate full of loaded guns proves nothing, but is only suggestive, as that proved to be the case with the Prisoner at the time.
No, it is possible that being a pair of gun runners was simply a cover in case what happened at sea, happened. That they had been shadowing the Prisoner aboard his sea-going raft since he cast off at the village, Ernst and Guther being agents working  for the Village. That it was their task to maintain a shadow over the Prisoner, and come to his aid if he gets into trouble, as he did, and as they did. And so as the Prisoner clambers aboard he makes a search of the launch, and finds what he is intended to find, a crate of loaded guns, and arrives at the conclusion he did. That he was aboard a gun-runners boat!
But I find this improbable, as the boat and her crew just so happened to be in the right place and at the right time. They gave the Prisoner time to get aboard their launch, before getting underway again. They didn't turn a hair when tucking into the Prisoners provisions, unless those tins of Village Food were already aboard.
Oh yes, the deliberate act of dumping the unconscious body into the sea, is what would be expected of gun-runners. But then we come back to that slight delay in getting the launch underway. If there had not been that slight delay, which was enough for the prisoner, he would have been left to drown at sea. 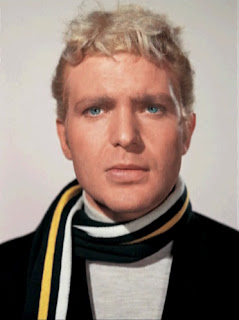 So, I wonder where they got this little pipsqueak from? He looks like one of Hitler's blue eyed boys alright, what with his blonde hair, along with his cold, and unfeeling attitude towards the village citizens. There'll be mass reprisals alright, and he'll enjoy overseeing that they are carried out correctly, and with as much brutality as possible! "No it wasn't me" I can hear him plead "I was only obeying orders!" Yes, well that's as maybe, and probably what he said at . Because all this so called heir presumptive is, is just one of No.1's bully boys. A snivelling little creep, who grovels and crawls on his hands and knees just to get on the good side of No.1. Promising everything, and giving his word, for whatever that might be worth. Oh yes, this one will go far. But one day it will be his retirement, if he should last that long. And I just hope they arrange something equally suitable for him, when that day comes.
Because this man, and I use the term loosely, gave up his SS uniform and jackboots, for a piped blazer, deck shoes, and the old school scarf. So don't let him fool you. He didn't fool me!
Footnote: To be perfectly honest, actor Darren Nesbitt had had his hair dyed blonde for the film "Where eagles dare," in which he poaled a SS-Gestapo officer

I can understand the meaning behind the various signposts to be found around the village, most of which are self explanatory. I can even see the iron of the signpost ‘walk on the grass,’ being the opposite of ‘Don’t walk on the grass,’ possibly being one of those times when citizens can show their defiance of the Village! But for the life of me I cannot get my head round the meaning for this signpost. I mean what's all this "" about when it's at home?

Supervisor’s Report
Well part of the machine I might be, and more than a mere cog as No.12 perports to be. But at least my position is reasonably safe and secure, safer than that of No.2 anyway.
I don't have to get myself involved with complicated plots and schemes in order to extract informaton from that No.6! But when I do try and give some input I only get my head bitten off, so mainly I keep myself to the control room and my administrative details, at least when I'm on shift that is.
I was once promoted to the position of No.2 you know, oh yes. But the position only lasted a week, after that I had to take my place as a delegate of the Assembly. Soon after which all hell broke out, and the village evacuated! I knew that No.6 was trouble the moment I first laid eyes on him, as he was leaving No.2's office that time, and we passed as I was entering.
In my opinion there is only one way to get any such required information from No.6, and it doesn't entail any highfaluting schemes and plans. Such plans have never achieved anything, some have never even come close to succeeding. All you have to do is have no.6 taken to hospital. Well you don't even have to go that far, you can do it to him in the comfort of his own home. Just inject him full of the truth drug Scapolomine, then he'll tell us anything we want to know alright, including that precious secret of his..... the reason behind his resignation. Or even better, take him to the Therapy Zone, get him drunk, then No.6 would talk his mouth off. And what's more we still wouldn't be damaging the tissue!