This is No.62, he's not a very remarkable fellow, however he does happen to be a Guardian. Certainly he has the build to be a Guardian, and how do we know he's a Guardian, by his attitude to others of course.
Because it was during that episode Checkmate, that No.6 encountered No.62, and that is the important number 62 so mark it well, when he was trying to discover who were the prisoners and who were the warders judging people by their attitude towards him. And so as No.6 faced this man in the Piazza by the fountain, this burly set man stood up and faced No.6 down..... Guardian!
But this was not the first man to be put to No.6's attitude test, oh no. He had already put his test to other citizens of the community, and was crossing them off upon the chess problem in the copy of The Tally Ho which he carried with him. You might say No.6 was wiping them off the board as citizens failed his test. 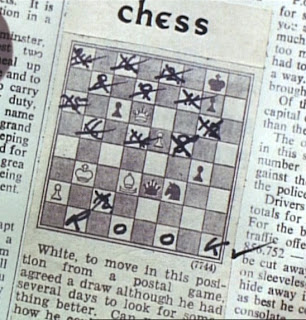 Here is an image of the chess problem in The Tally Ho, and as you can see No.6 has just crossed out the number 8. Nothing remarkable in that, except the fact that having given his "look" at No.62, who then stood up and faced No.6 down, why then did No.6 cross out the No.8, of which there are two written on the chess problem, when it should have been 62? What's more he hadn't written 62 on the chess problem, as he had with others he had approached. There are also three 12’s crossed out! It's not such a significant point, but an interesting observation which could be seen as being a small problem in itself. But then perhaps No.6 thought we wouldn't notice!

Is the Prisoner a "club" man? What I mean is would he join a club? Certainly he enjoyed going to Sir Charles Portland's club, where their favourite dish Jugged Hare was on the menu. But in a club can one maintain one's individuality? I joined Six of One The Prisoner Appreciation society a number of years ago, and the question was once asked amongst its membership, can an individual survive in such a society of like minded individuals? Well as long as any such individual is allowed free thought, and is able to expresses his or her opinion on the matter of the Prisoner or the society he or she is a member of. Otherwise such a society becomes oppressive, and goes against everything the Prisoner stands for.
Also the question was posed, "would the Prisoner join such a society as Six of One?" Well I find it highly unlikely, as Six of One did not exist at the time of the series the question is irrelevant, and even if it was, why would he want to? Nor do I think the Prisoner would openly join any club where he could not be himself. In any club or society, or fan club its members are free to get involved as much or as little as they choose. A club such as Sir Charles Portland is a member of is one where you can come and go. Have lunch, dinner, or tea. Pass the time of day with other members, then go home to the wife, or girl friend, and no further duty is placed upon you. In a society such as Six of One, if its members do not get involved nothing will happen. Its a different kind of club you see. Besides McGoohan himself never allowed himself toget involved as an honorary member! But then perhaps honourary members feel they have no need to get involved!!

The long and the short of it! this image was taken at the press conference held by Patrick McGoohan in September of 1967, as he launches his series the Prisoner.
During the conference McGoohan was as enigmatic as ever, refusing to answer questions of the press, by posing questions of his own. "What does Rover mean?" was one such question, McGoohan's response to which was "Well, what do you think it means?"
You see, you just can't get a straight answer from the man. Which is probably just as well. After all, if McGoohan had answered that question, and gone on to explain everything about the Prisoner, where would we be then? Well burden less, and free of any prison which answers might make!