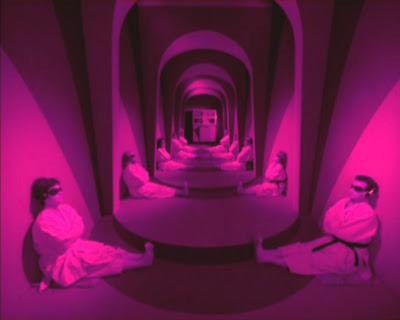 These good citizens are undergoing therapy treatment, why? Because they are suffering from a little known pshycological and mental disorder called Prisoneritus! This affects a certain kind of person who has dedicated him or herself to a cult television series called 'the Prisoner.' Prisoneritus can be caused by watching the series too much, thinking about it for too long, and through too much brainstorming with fellow enthusiasts.
What takes place in this aversion therapy room is, the patient is deprived of sight, and through the headphones 'the Prisoner' soundtrack is played over and over again, and again, this includes dialogue until the patient is absolutely sick of 'the Prisoner!' The treatment has been so effective, that patients have been known to be physically and violently sick at even the very mention of 'the Prisoner!'