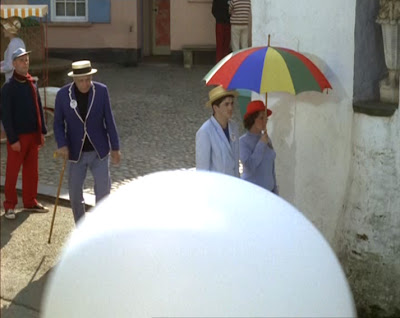 No.14 the chess champion told No.6 that playing chess is the only way one gets to satisfy the desire for power in the Village. He might consider himself too old for escape, perhaps he has tried in the past, having himself discovered how to distinguish between the prisoners and the warders. But having made that discovery it appears not to have done No.14 any more good that it did No.6. However, No.14 can still show his defiance, by not being still like all the others in the street and square, but simply keeps on walking. I wonder why the Village Guardian did not detect No.14's movement, and attack him like it had the young man in 'Arrival' who wouldn't be still when ordered by No.2?