How Does It Work?
The beam is hidden away in the flagpole, and the only time we see "the beam" activated is during the episode of Hammer Into Anvil, when No.6 sends a message by Pigeon.
The Pigeon is tracked by radar, which is clever enough and the radar sensitive enough, to be able to track a Pigeon in the first place. The beam is set to minimum strength, and so the Pigeon is brought down by the beam, which must have a deadly accuracy to be able to bring down a single bird in the way it does. But exactly how does it work, perhaps it is a sonic beam!
Perhaps just as remarkable, is the fact that a search team actually found the Pigeon that had been brought down by the beam.
The Pigeon brought to No.2, who is seen here removing the piece of paper attached to the birds leg, which contains No.6's coded message.
I know that the control room personnel had a radar fix on the Pigeon in flight. But surely as the beam brought down the bird it could have fallen anywhere in a wide area. Not impossible I suppose, to find the Pigeon, the above photograph is proof enough of that, but it would have taken time. And in taking such time, I can picture No.2 impatiently pacing the floor of his office, or the cipher room, awaiting  news of the Pigeon!

Do Not Forsake Me............ the Village font the Prisoner with the open Greek “e” along with it’s canopied Penny Farthing logo.

Do not forget us. Remember us, keep us in mind! But I have to admit that I have been lured to a large degree to the “re-branding” of THEPRIS6 with the new art neouvou style design. 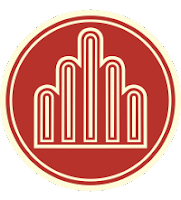 I took to the re-branding almost immediately, because it looks fresh and new. And yet ‘the Prisoner’ has been re-branded before in the 1998 by VVL which was a subsidiary of Polygram, this for the 30th anniversary of the series.

For me this re-branding didn’t work, I think the art designed was trying to be too clever. The “e” was replaced by a “6,” it might have worked better if the “6” had replaced the “o” as in THEPRIS6.

Apart from wanting to know why the Prisoner resigned, is the ultimate motive of the village's administration to bring both the good and evil sides of the Prisoner together, possibly for the good of the village? If it is, it looks like No.6 was having none of it, and that's probably why he resigned. He didn't accept, he rejected!