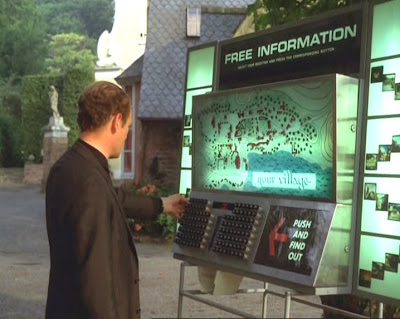 On the morning of his arrival, the Prisoner suffers a surreal moment up in the Bell Tower. He goes to the Cafe and questions the waitress, after which he goes round the corner to the telephone kiosk and tries to make a telephone call, but there's no call without a number! After that he finds the electronic Information Board, and running his finger down a numbered list, he stops at 9 Taxi. But instead of pressing the number 9 on the button control board, he presses 1! At that moment, almost instantly a Village taxi pulls up, and an oriental taxi driver asks him "Where to sir?" and receiving no reply then speaks to him in French, because she thinks he might be a Pole or Czech! It has been considered that because the new arrival to the Village has pressed the number 9 on the panel, that this causes the taxi to arrive almost instantly. Yet we know that the Prisoner doesn't press the number 9, but number 1. So it could be the case that the taxi arrives almost instantly in order to stop the Prisoner from discovering the whereabouts of No.1 on the electronic Map of The Village.


Be seeing you
Posted by David Stimpson at 07:59