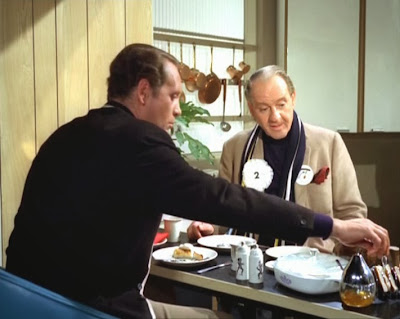 French cuisine, International, French....... On first observation I thought what's so French or International about poached egg on toast? But looking closer it's a poached egg on a piece of quiche, which was probably unheard of here in Britain at the time. Then why does not No.2 join No.6 in this fine French/International cuisine? All he is offered is a slice of toast which he butters! Ah, but then No.58 did bring breakfast for one! Is this one of No.6's privileges, seeing as it's repeated in 'Dance of the Dead,' but a privilege lost by the time of 'The Chimes of Big Ben' as we see him about to make his own breakfast when Nadia-No.8 comes calling.
I know that No.6 has better living accommodation than No.2, but this indicates that No.6 also eats better than No.2. After all he could have ordered breakfast for two, instead of having to settle for a piece of toast offered by No.6, with or without marmalade!!


Be seeing you
Posted by David Stimpson at 07:58