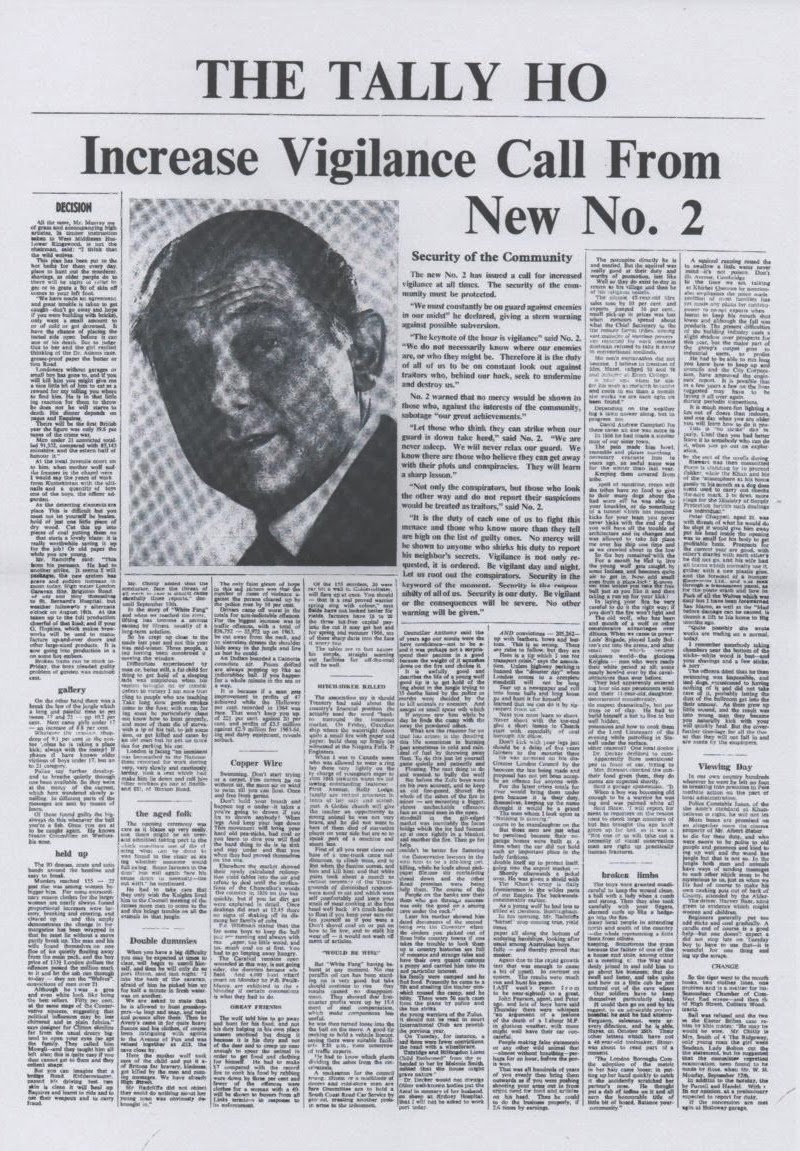 I used to be of the opinion, that fictionally speaking No.2 of Hammer Into Anvil' was Thorpe of 'Many Happy Returns', who had either been seconded to, or volunteered to go to the Village so as to meet up with his ex-colleague and continue his interrogation, that of No.6. And yet there is a great deal of time and two episodes between 'Many Happy Returns' and 'Hammer Into Anvil,' what's more No.2 seems to have been more concerned with the security of the Village, rather than continuing the machinations against No.6.
It would appear that No.2 understands that there are enemies within their midst, but that he doesn't necessarily know who they are, or where they might be, but it is the duty of all citizens in the Village to be on constant look out for traitors, who behind their backs, seek to undermine and destroy them. It would seem that No.2 has written his own epitaph within his article in The Tally Ho, because isn't that what happened to him?! No.2 went on to say "We know there are those who believe they can get away with their plots and conspiracies," well here he must have been talking about "Jammers!" No.6 was jamming, listening to LP records, question marking the word "Security" on the front page of The Tally Ho. That time he wrote that note to XO4, when he hid blank sheets of paper in the Stoneboat. Speaking on telephones, putting in messages in the personal column of The Tally Ho. Sending a coded message by pigeon, heliographing, and generally putting the poison in!
No.6 may very well have been the original Jammer, as a friend once suggested. And yet by the time of 'It's Your Funeral,' No.2 knows who are the enemies within the Village, and is in possession of a list of malcontents with No.6 top of the list. What's more it is known who the Jammers are, but it appears that they are not as dangerous as the malcontents, as whatever a known Jammer may get up to in their plots, schemes, and conspiracies, the Observers just let ride!
So perhaps No.2 of 'Hammer Into Anvil' wasn't as paranoid as we might think. He knew there are enemies within the Village, the fact that No.2 in 'It's Your Funeral' had a list of malcontents proves that, he just hadn't found them, and that's why he couldn't trust even those close to him. And if No.6 was the original Jammer, carrying out schemes and non-existent plots against No.2, he wouldn't have known what No.6 was up to, therefore No.2 would have had to investigate the activities of No.6.


Be seeing you
Posted by David Stimpson at 09:12