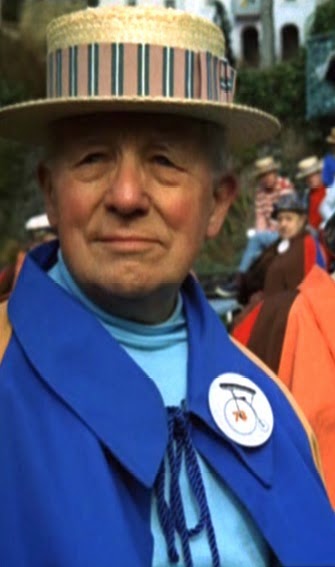 It is said that there is no number 7 in The Village. We know that the number 7, and any number containing the digit 7 had been removed from the button control panel of the electronic ‘Free Information’ board. And yet Number 73 does appear in ‘Hammer Into Anvil,’ what’s more, the digit ‘7’ of the number 73 appears on the headstone in the Village cemetery. The explanation of this is that perhaps the rule of there being no 7 in The Village had either been forgotten by the time of the production of Hammer Into Anvil,’ or forgotten entirely. However, the digit 7 appears in a much earlier episode, that of ‘Free For All.’ The above image is of a film extra who appears in the crowd scenes during the election period of ‘Free For All.’ The second digit of the number is difficult to make out, but clearly the 7 of either 70, 76, or 78 can be clearly seen. I have been attempting to see if I can find the person wearing the number 7 badge, but thus far I have not been successful. Clearly it is difficult to make out the number of many badges worn by the film extras. But reason and logic dictates that the number 7 is in The Village somewhere!