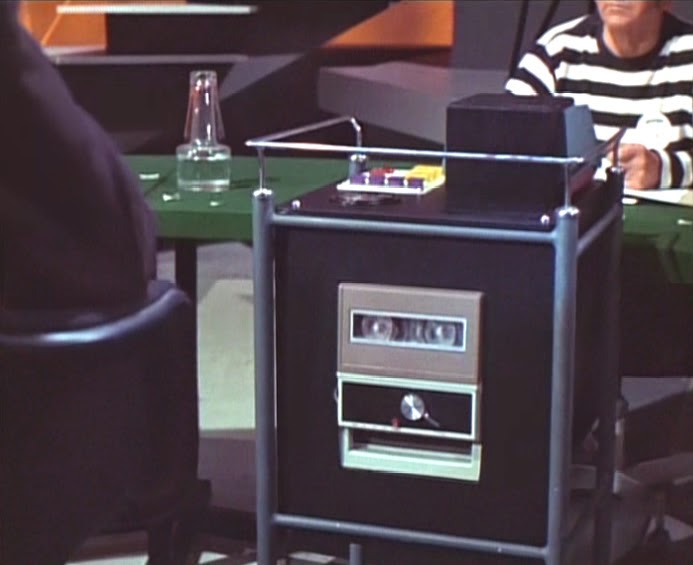 In ‘A Change of Mind,’ when it comes to Number 6’s complaints {not his own complaints of which he has several, but those and the charge which has been levelled against him} the accusation of Number 6’s disharmony stems not from Number 18-the Chairman of the Committee, but from a voice from a tape player! It’s the same voice which feeds Number 93 the words of his confession.
“They’re right of course. Quite right. I’m inadequate, inadequate. Disharmonious, I’m truly grateful, believe me, believe me, believe me.”
During Number 6’s interview with the Committee, although the tape player is switched on by the Chairman, it is suggested the voice emanates from the machine and seems to be independent. In other words the voice reacts to what Number 6 says, or is it the other way around, seeing as Number 6 appears to be speaking to the voice of the machine, rather than to the members of the Committee.
No.6 “I take it you’ve checked my file…regarding hostility.”
Voice on the tape “Your files are no concern to us. Any information is with Number Two.”
“Really.”
Number 18 Committee Chairman “It is the duty of this Committee to deal with complaints.”
“Complaints?”
Voice on the tape “Your complaints.”
“Your complaints.”
“Well done, I have several!”
“You realise the serious charge has been levelled against you, particularly your attitude towards your fellow citizens. We deplore your spirit of disharmony”
“That’s a common complaint around here isn’t it?”
Chairman “I would council discretion Number Six!”
Voice on the tape “You do appreciate that everything you say is being recorded.”
“And may be used as evidence against me!”
“This is a strictly impartial Committee.”
Chairman “Number Six you are not called before this Committee to defend yourself.”
“All we ask is for your complete confession.”
Chairman “I’m sure you will co-operate Number Six. Gentlemen its time. I think we are more than ready for a tea break. The Group and medical reports will be considered in full at the resumed hearing of this Committee.”
Just a minute, during part of this scene the striking of the bell in the Bell Tower can be heard. But the Committee Chamber is well below ground, so how is this possible? Unless its with the voice on the tape, which means the voice was recorded, if it is a recorded voice we hear, was recorded somewhere out of doors. And there’s one other small matter. At the outset of the interview with Number 6, the Chairman presses a button on a control panel effectively switching on the tape recorder. But the voice, which is suggested to come from the tape recorder is heard to speak before the tape recorder is switched on. So it’s a disembodied voice which emanates from another source. Because it’s impossible for a recorded voice to emanate from the tape and react to what Number 6 is saying. The tape recorder is simply doing what the disembodied voice said, recording everything Number 6 says. So from where is the voice coming? There is no black loudspeaker on display, but there must be one. Perhaps the voice is a live feed via a microphone, and because of the sound of the chiming of the bell, the man must be somewhere outside in The Village. But the question is, why the voice at all? After all the voice says nothing the Committee Chairman could not say!