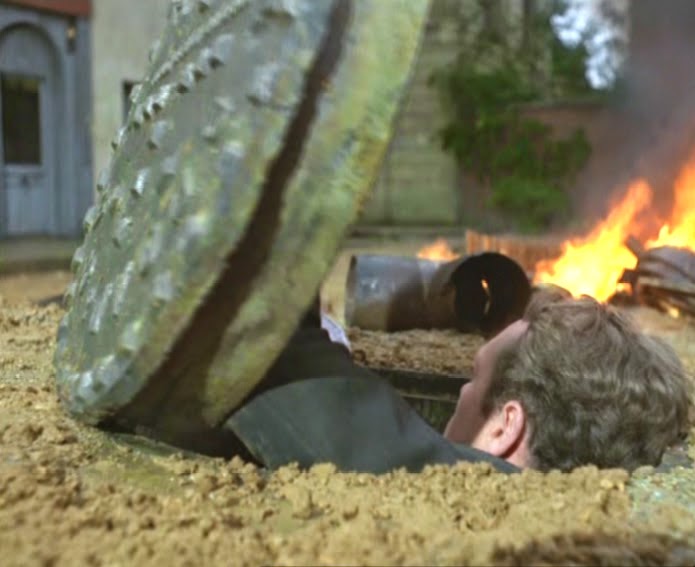 A favourite scene takes place in ‘The Girl Who Was Death,’ when The Girl is trying to kill Mister X through the Butchers, the Bakers, and the Candlestick Makers. Then as he escapes the “gas chamber” of the Candlestick makers, he leaves himself open to heavy machine gun fire, and has to take refuge in the Blacksmiths. There he finds an International loader, and as luck would have it the key has been left in the ignition.
Climbing aboard, Mister X starts the engine and backs the crawler out of the Blacksmiths, crashing though the doors and into the street of Witchwood. He uses the bucket to protect himself against the continued heavy machine gun fire. Even against a number of German stick grenades. But when The Girl employs a German Panzerschreck, {meaning tank terror} and fires an 88 mm anti-tank rocket, or mortar at the crawler, it would appear that Mister X’s fate is sealed.
And yet judging by the expression on Mister X’s face he seems to sense his end is close at hand. The Girl fires the Panzerschreck and the International crawler is destroyed. All that is left of the machine, as The Girl takes her leave of Witchwood, is heap of hot burning metal!
Ah! But it would appear that our hero is not finished yet! For a manhole cover of a sewer begins to lift, and Mister X emerges out of the man hole, and sets off after The Girl once more.
I like the way Mister X emerges out of sewer through the man hole, because it reminds me so very much of the opening sequence of the 1959 film ‘The League of Gentlemen,’ starring Jack Hawkins. Whose character emerges out of a man hole of a sewer in much the same way! 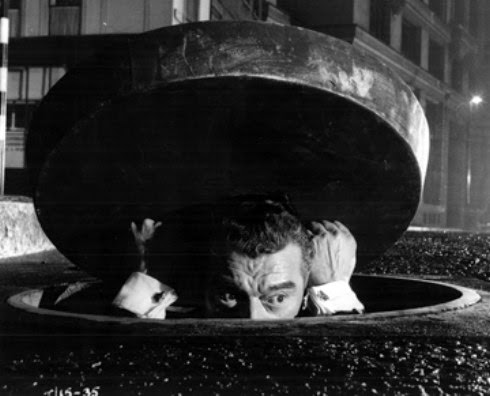