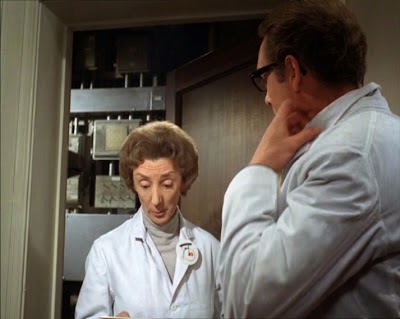 Number 6 dons the white coat and the spectacles of Number 116, {strange how Number 6 can see through those spectacles, but then he would, seeing as they're McGoohan's own spectacles} to help disguise himself as he makes his way along a corridor in the Town Hall during the episode ‘Dance of the Dead,’ trying each door as he goes along. But then Number 20 emerges from a side room, and meets with Number 116 and she assumes him to be who he looks like, a doctor. Number 20 has an envelope for Number 2, it contains a termination order, and Number 2 must get it straight away. Now you would think, wouldn't you, that Number 20 would be emerging from some Communications Room, a Cipher Room perhaps. But no, if you look into the room beyond the door, it is plain to see that Number 20 emerges from nothing more than a simple electrical 'switch gear' room!
But just a minute. No.2 receives her instructions via a teletype in that elaborately decorated room, back along the corridor. So who issued the termination order on Roland Walter Dutton to Number 20? I can only think that Number20 received the termination order because Number 2 was at the Ball!

Be seeing you.
Posted by David Stimpson at 09:02