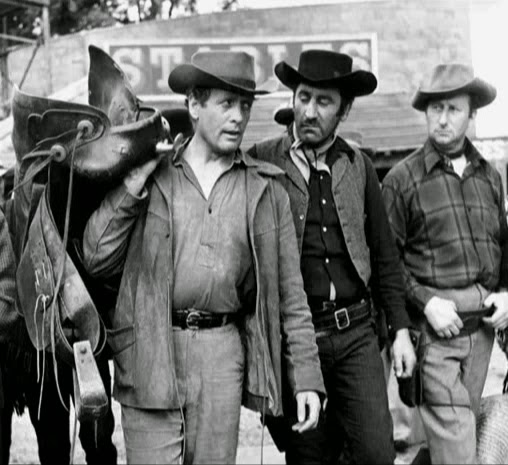 The saddle carried by the Man With No Name has been seen as a metaphor for Christ carrying his cross. For myself I see a man who has lost his horse, perhaps the animal came with the job, and after he'd resigned as Sheriff, he gave up his horse along with the job. On the other hand, it might be that the stranger's horse simply went lame and he had to shoot it. Ah, the flaw in that thinking is that he gave up his gun with his job! Well for some reason the Man With No Name has no horse, and he's not likely to get another, not with horse flesh priced at $5,000, and the rest being expensive!
Another metaphor might be that the Prisoner is seen to be carrying a heavy burden on his shoulders. So perhaps that's why the Prisoner resigned? Not being able to carry that burden any more!