Vote For Number 6 He's The One For You! 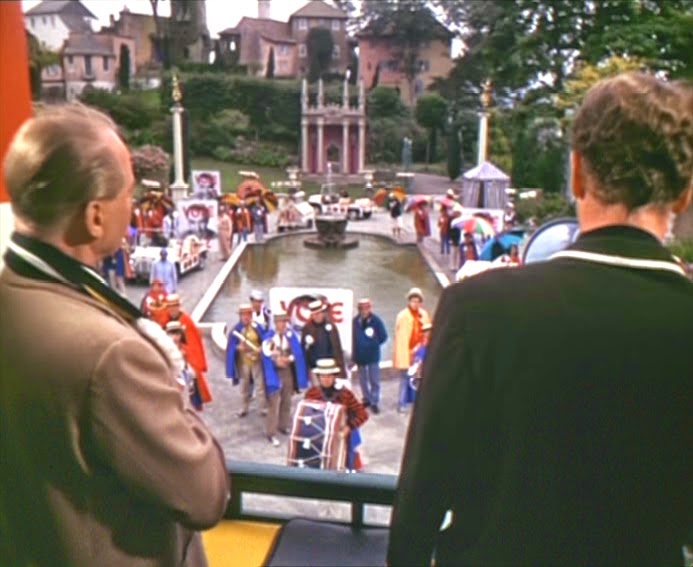 Number 2 administers with the majority of the people. But that's what worries him, its very bad for morale. Some of the good people don't seem to appreciate the value of free elections, they think its a game. It would seem, and as a matter of fact that's the way it turned out, everyone votes for a dictator.  Not at all, it's just that their resistance is low. Quite frankly Number 6 is just the sort of candidate they need. Is he? Number 6 is particularly militant, individualistic, and will fight for freedom at all costs, he's a troublemaker! perhaps that puts Number 6 on the far right when it comes to the question of politics. I recall when in 'Arrival' the Prisoner was given a questionnaire to fill in by the manager of the Labour Exchange, and when it came to the question of politics, the Prisoner suddenly had a tantrum and threw the toy out of the pram. Well he smashed Number 21's building set, same thing.
A number of people hold up placards with Number 6's face on them, and the other side is blank. I thought it might have been a nice idea if those placards had had the face of Number 6 on one side, and that of Number 2 on the other. That way the electorate could show their allegiance by showing the one or other candidate. At the outset of the election the placards would show Number 2, then suddenly at the end of Number 6's opening speech, the placards would be spun round to show the face of the new candidate!

BCNU
Posted by David Stimpson at 08:06