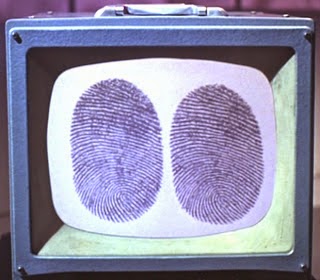 In the question of the identity of Number 6, it would appear that he would not put his trust in science, as he saw that it could be perverted. Number 6 would rather be convinced by a human being than a machine, and I can see what he means. On the left is Number 6's thumb print, so how can the thumb print on the left, being that of Curtis, be identical? Perhaps Curtis was wearing a thin, clear latex thumb print of Number 6, in the same way as James Bond did when he was impersonating a guy called Franks in ‘Diamonds Are Forever!’ Or maybe it is a simple case of perverting science, that what we see on the screen isn't what's on the end of Curtis' thumb!
And when it comes to human instincts, Number 6 got it wrong with Alison, as he did with most women in The Village. Number 2 saw the mental link between Number 24 and Number 6, and having got to 24, used that mental link against Number 6. I have often thought that Number 24 betrayed Number 6 so easily, that she could not have offered much resistance. However, one can only guess what Number 2 promised to have done to Number 24 had she not co-operated in betraying Number 6.

Be seeing you.
Posted by David Stimpson at 07:54